So I know I have been a little bit A-wall on the blog for the past few weeks but I just didn’t have anything that I was inspired to write about and then I have been away for the past 10 days in Austin and just wanted to enjoy my holiday but I am back and rearing to go. I headed over to Austin to visit my brother and his girlfriend who moved over in October to work.I hadn’t seen them since September as I headed off to France so I was looking forward to seeing them and catching up and also seeing this new place they were living in. I had never been to America before or been on a long haul flight so it was an experience as I got up and headed to the airport to start my journey. With my bag full of Irish chocolate I was dreading them weighing my suitcase but it all turned out fine and I survived my 10 hour flight with the help of some movies and music.

Stepping off the plane to a wall of heat was an amazing change from the cold weather I had left behind in Ireland. Driving along for the first time everything just looked so different and so big from the roads to the cars to everything but it was amazing. We headed to my brother’s apartment , dropped my bags and then it was off to my first meal Tacos, and this was only the start of my food tour of Austin but that’s another post entirely.  Then it was time to try stay up and not get jet lagged and wake up the next day feeling refreshed. I had the next day to myself to explore as the other two were working so I got my camera and headed down town to explore. Austin is a lovely city and to me it felt very intimate even though it also felt huge at the same time which was nice. I spent the day taking photos of the streets and the capitol building and then headed to the Texas State museum to get some culture and history in. That evening we went to see the famous bats on congress bridge but it was the one night they decided to hell with it lets just stay in so I’ll just have to take my brother’s word that they are amazing.

Day 2 again was spent wandering around Austin, I walked along the board-walk on Town Lake and headed to Whole Foods for some lunch to have in the sun. Of course more food was eaten and more photos were taken. I went to a foam rolling class the next day with Caroline and then explored some of South Congress which has some weird and wacky shops. That evening we went for a lovely Indian dinner (on the parents) which was on this really cool street Rainey Street where all the bars and restaurants are in converted bungalows. It’s has a really homely feeling to it which was cool. Friday again was spent just exploring before heading to Hooters for some grub before a night out on Dirty 6th which is the party street in Austin and it was packed as it was graduation weekend. It was an experience to see the whole street closed down filled with people and police alike but it was great fun.

We decided to go kayaking on Saturday as the weather was lovely and sunny but that didn’t last long. After about 5 minutes in the boats the heavens opened into a torrential thunderstorm which we tried to weather but ultimately had to abandon. We got absolutely soaked and then had to walk home in more rain. That evening saw everybody on flood and tornado alert which was a new one for me as we don’t get extreme weather like that in Ireland. We ended up being fine but many places got flooded badly. We spent Sunday quite relaxed as everyone was recovering from the activities of Friday and Saturday but I still got out to explore a bit. Monday was memorial day in America but unfortunately it was a wash out with more flood and tornado warnings so we spent it inside on the couch eating Dairymilk. We also decided to watch Twister which might not have been the best idea when we had tornado warnings but we were educating ourselves on what to do if a tornado hit :).

On Tuesday we headed to the Hope Outdoor gallery which is like a giant graffiti gallery outside . It is amazing and really cool. Then we headed to IHOP because of course no trip to America would be complete without a trip to IHOP. I got the double chocolate chip pancakes which were so good, I made a fair dent in them but couldn’t finish them all. After this we headed to CVS to do some make-up shopping and I also bought some Hershey’s Kisses which are amazing. On my final day we went to a shopping outlet about 30 minutes from Austin which was huge. I had strict orders from dad to get him some Levi jeans and then I wanted to do some damage in Bath & Bodyworks. I didn’t do too much shopping as I didn’t see too many things that screamed ‘buy me‘ and once I got my Bath & Bodyworks fix I was good.

Then it was time to fit everything in the suitcase which was considerably lighter without all of the chocolate that I had brought over. With one final grilled cheese sandwich and a cool dancing Uber driver I was off to the airport to head home. I had such an amazing time exploring Austin and seeing where my brother and his girlfriend have called home for the past 7 months. This trip has also just made me want to explore more of America and the word in the future and travel.

Now it’s time to try and not let the jet lag beat me as I try to adjust to Irish time. 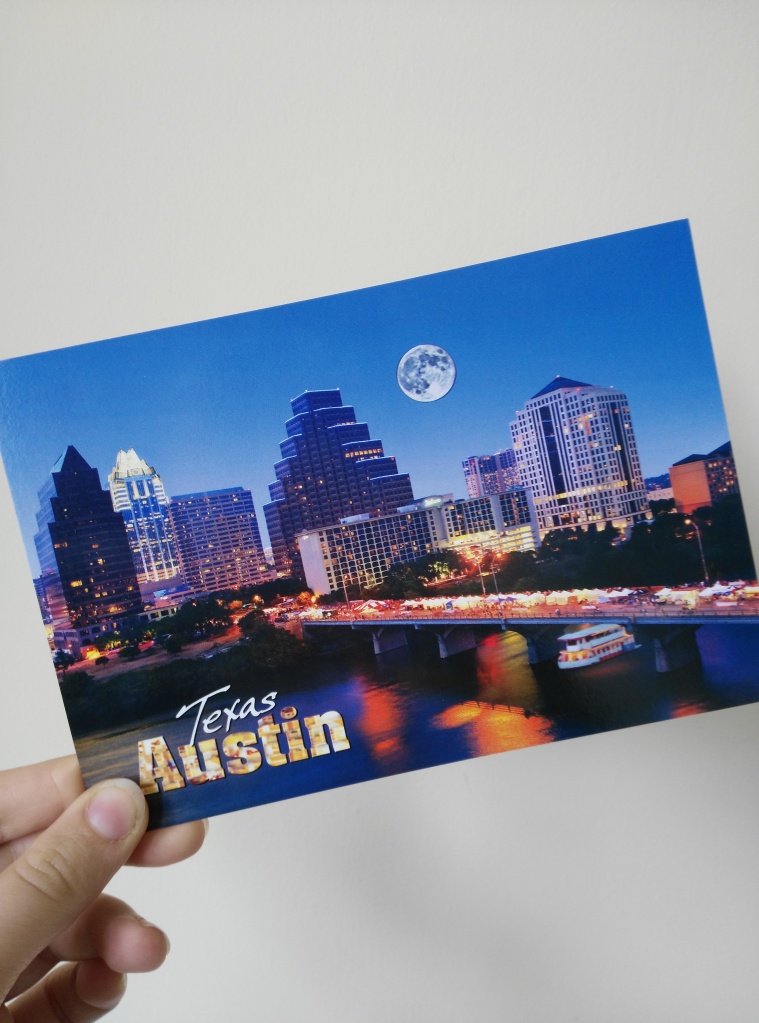